“Opportunities multiply as they are seized.” – Sun Tzu

Kanji radicals won’t be easy to learn, per se, but the time you put into learning them will save you so much time on your kanji it’ll be well worth the effort. Plus, I’ll make sure it’s not too hard, either. Radicals will be your first experience on TextFugu with mnemonics. Basically, what we’re going to do is make sure you’re always associating new things with stories or concepts that you already know. That way they’ll be much easier for your brain to remember. Here’s a really simple example of this: 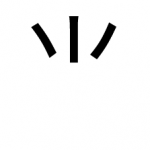 This is the radical “triceratops.” Nothing too fancy about that, but you can kind of see why it would be called “triceratops.” if you imagine these three lines as horns, you’ll notice that they form the same horn formation a triceratops would have.

Now, we’re not doing anything revolutionary here. Basically, we’re taking radicals, and associating meanings to them based on how they look (or sometimes based on their actual meaning… there are a decent number of “official” radicals that people occassionally use to look kanji up in a dictionary, but that’s about it). Later on, when we need to put together a more complicated kanji, we can use these associations to help build it up. When you see that the kanji is using the “triceratops radical” you’ll be able to retrieve only one memory (the triceratops one) rather than trying to remember the kanji has three separate strokes (plus a bunch of others). It just simplifies things and really helps you to remember any kanji you know the radicals for.

Don’t worry if you feel overwhelmed with all this info right now – you’ll be taken step by step through these things until you get the hang of it, at which point we’ll let go of the bicycle and let you ride.

You: TextFugu, don’t let go, okay? Keep holding on to the bicycle!

*lets go of the bicycle*

TextFugu: I’m not holding on, you’re doing this on your own!

*this becomes your most cherished childhood memory.

Anyways, let’s learn a bit about how you’ll use mnemonics to learn your kanji, mmkay buddy? Won’t be letting go of the bicycle just yet… or will I? Dun dun dunnn.